Shopping Cart
Your Cart is Empty
Quantity:
Subtotal
Taxes
Shipping
Total
There was an error with PayPalClick here to try again

Thank you for your business!You should be receiving an order confirmation from Paypal shortly.Exit Shopping Cart

Neddy. (on the right of both pics below ) Went north to be a happy national park trail riding horse, enjoying his life immensly with his paddock mate & trail riding with Mali, his new rider. Going well and very much enjoying the challenges she has for him.

Headed to Townsville to become a troop horse and show pony.

This stunning gelding is one of the best horses I have ever bred, hands down...the only better one, I have kept for me!

He's super impressive, very comfortable and the epitome of Waler bone and inquisitiveness.

Bye Bye big boy- we will definitely miss you

Headed a little further south, in NSW to eventually become a saddle and show horse.

Romeo has headed to the Canberra area, where he will become a pleasure mount, with the occasional showing outing, his new owner Sonja already owns a Waler with similiar breeding to Romeo, and was keen for Romeos' particular breeding. Romeo truly is a once in a lifetime bred gelding, with no other horses in Australia with his breeding.

We wish both of them a lifetime of great rides and fantastic future together.

Meka has headed south to the Melbourne area, to new owner Adam Bartlett. Adam already has a Waler and was interested in Meka due to her height; he is keen to use her for stockwork and pleasure and was quite taken with her.

We wish both of them all the very best, and I miss this gorgeous giraffe immensly- I do think I was mad to sell her, however, I have many more and enjoy working through each one and finding them their special person.

Grassbrook Will of His Own

Willoughby has found a new home in Stanthorpe, has become a riding horse and is working well.

We hope to see some updates in the future and follow his progress as he becomes Leona's number 1 pony. He's on the right, sharing with his new paddock mate.

He is working well, and has attended Pony Club, with a very favourable outcome for his rider.

Minni has found a new home up near Stanthorpe, and has an eager young rider as her special person. We wish Minni and Co. lots of fun rides and enjoyment over the years.

Following is a letter from his owners, with the photos on the right accompanying.

I can imagine that it would be hard for you to send a pony off to a new family that are a fair distance away. You have no idea what our place is like and what he’s going to.

So, here’s some pics for you to get a taste of Walki’s new life:

Here he is being tacked up for the first time-

We put Mickey and Zeke in a small yard behind so they don’t get in the way when we are riding. They were both quite pleased to see the halter and lead rope come out for Walki and not them today as it was pretty hot (by our standards!!!)

This picture made it to Facebook… Arran wants you to see that he’s very happy we have Walki now.

Good to go, he stood still while Emily hopped on and was alert but not spooky or silly. Such a good boy!!!

This is the boys’ home paddock. There’s a small creek just behind where they are riding at this point.

Lots of trees for shade near the water troughs. Emily was laughing because he wasn’t drinking but was playing in the water.

Today Emily did some walking, then trotting. Then they worked on cantering on the right lead. He did really well, she was so pleased with him.

He walked over the poles without any hesitation and was not at all worried about the other two boys watching him over the fence.

After his ride, we hosed him off and he enjoyed a good roll in the sand. The ground here is very sandy so any bare patches are good for rolling in. He rolled, then got up and then went down for a 2nd roll…then walked along a bit and went down for a 3rd! So much for being clean but he looked like he was enjoying himself…unfortunately we were getting their feeds ready so missed it with the camera. He’s just had some hay so far but once he’s settled in and we see how he goes on our paddocks, will look at what we need to be feeding him.

Walki has been enjoying our green paddock!

We feed them fairly well apart. Zeke has already established himself as top of the heap. There is still a little ‘discussion’ between Mickey and Walki over who is at the bottom. So far, Mickey seems dominant but I get the feeling Walki is biding his time. I think once he settles in; he’ll let Mickey know who’s bigger. There’s not much nastiness in it, just the usual alpha male blustering!

Do you think that maybe we are partial to bays?

Not really interested in Arran’s carrot offering but loved the water trough that was just filled with fresh water.

Jo, I really believe he is the right pony for our family. After her ride, Emily said he’s got a beautiful floating canter and gorgeous trot. She rode today with a big smile on her face. Arran announced that he already loves Walki almost as much as Mickey!!

In nearly every picture we have of him, he’s grazing. He even started eating the grass with his back feet still on the float last night when we got home. It’s like he can’t believe how green it is here. Today the three horses were in the shade under the trees, Mickey & Zeke were near each other but Walki wasn’t too far from them (maybe 5-10 metres?). He was happily munching on grass but came when we called. He was easy to catch (hopefully Mickey will learn a thing or two in that department!) and seemed quite content.

I will keep you updated but if our first day with him today was anything to go on, he’ll be a wonderful addition to the family.

Thank you for agreeing to sell this beautiful boy to us, 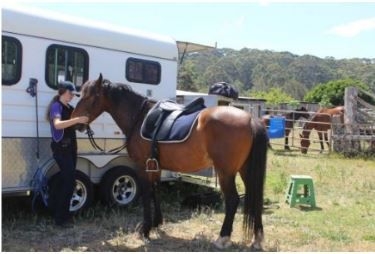 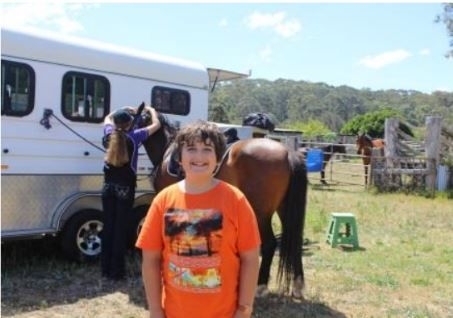 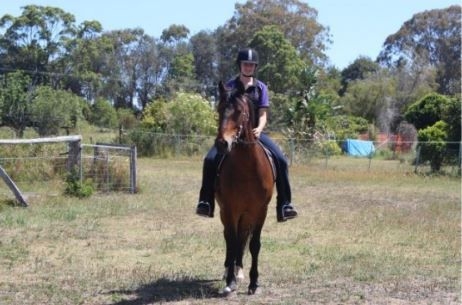 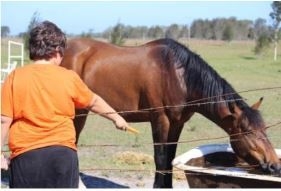 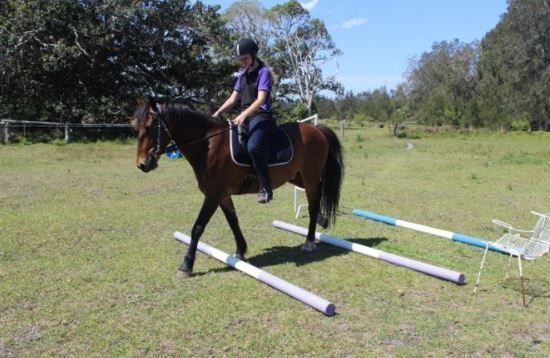 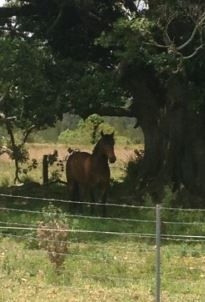 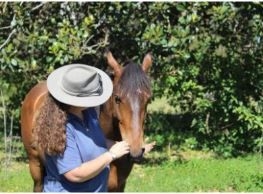 Congratulations to new owner of Grassbrook Colby- the last of our Non Waler stock to be sold. We have held on to Colby, as he has been a firm favourite of the family, but when the time came to look for the right home, Allison Payne stood out as the perfect complement to his cruisy, personable, puppy dog nature; We wish her all the best for their future, and in her words " I have found my dream horse- no more driving my family mad with trying to find just what I want; we've bonded and he is everything I could want and more." Allison hopes to get to some clinics into the future, but right now, she's more than happy to get to know her new man.